Russia Pulling Strings on Both Sides of The Atlantic

Just a few days away from the German federal election, a widely held opinion is that Germany has been spared from interference by Moscow. German Chancellor Angela Merkel, the main advocate of the current EU sanctions on Russia, is widely expected to remain in power come September 25. Moreover, hypothetically compromising documents that were lifted from the German Parliament in a 2015 Russian cyberattack have not yet been published. On the surface, the situation could not be more different from that of the 2016 U.S. presidential election campaign, which saw active Russian meddling, including the devastating leak of a trove of hacked emails from the Democratic National Committee.

But, behind the scenes, Russia is remarkably active. Since July, the Alliance for Securing Democracy (ASD), housed by the German Marshall Fund in Washington, DC, has been monitoring the activity of Kremlin-affiliated actors on Twitter in the U.S. via its Hamilton 68 dashboard. Last week, ASD launched Artikel 38, a similar tool that monitors the activity of Kremlin-affiliated Twitter accounts in Germany. 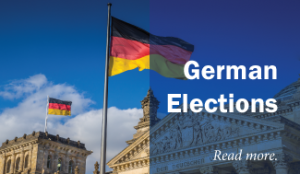