RT Deutsch Finds a Home with Anti-Vaccination Skeptics in Germany

YouTube’s decision last week to remove RT’s German-language channels for violating the platform’s coronavirus misinformation policy sparked an outcry from Moscow, with the foreign ministry claiming that the move was “fully in line with the logic of the information warfare unleashed against Russia.” The ban, which came about after RT Deutsch attempted to circumvent a short-term suspension by posting to an affiliated channel (a clear violation of YouTube’s terms of service), was nonetheless framed by the Kremlin and its media outlets as “a declaration of media war” and “a media version of Barbarossa”—a reference to the Nazi invasion of the Soviet Union.

Whether YouTube’s enforcement of its policies is consistently and equitably applied across channels is perhaps debatable; what is not debatable is that over the past year RT Deutsch has cultivated a sizeable audience—not just on YouTube but across multiple social media platforms—by promoting content critical of vaccines and other public health measures. This is particularly evident on Facebook, where the common denominator in groups and pages that most actively share RT Deutsch content is not an interest in politics, geopolitics, or Russia, but an opposition to vaccines.

RT Deutsch is (or in the case of YouTube, was) a significant player relative to other German-language media outlets on social media. As we’ve previously noted, according to CrowdTangle data RT Deutsch’s Facebook page has registered more interactions (likes, shares, comments, etc.) over the past year than any other German-language media page, outpacing traditional domestic media outlets like Der Spiegel and Die Welt. Its page also gained more than 100,000 followers over the past 12 months, an increase of nearly 20 percent. 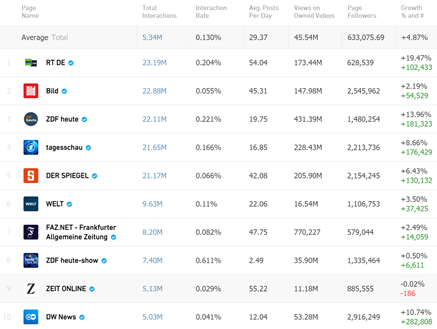 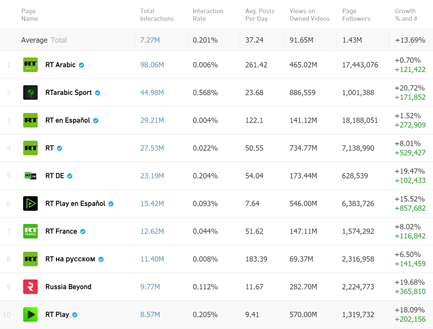 On Twitter, ASD’s analysis of German-language media outlets over the past six months found RT Deutsch to be the third most retweeted account (though a few sizeable outlets like Der Spiegel were not included in the comparison). And on YouTube, RT Deutsch’s top-performing videos routinely received six-figure view totals. As noted by the DFRlab, there is a need to contextualize RT Deutsch’s social media performance, starting with the fact that RT Deutsch only exists in digital form and thus is more likely to see inflated performance metrics compared to outlets whose content is available via print or television. Caveats aside, however, RT Deutsch is a clearly a presence in Germany; far more so, it seems, than its sister channels in the United States and United Kingdom.

While RT and its affiliates ostensibly exist to present a “more balanced picture” of Russia, their outputs often have little or nothing to do with the country. Analysis of RT Deutsch’s YouTube outputs over the past six months, for example, found that the United States was mentioned more often than Russia, and on RT’s main YouTube channel, Russia was only mentioned in roughly 5 percent of videos, according to data captured by ASD’s German election and Hamilton dashboards.

During the coronavirus pandemic, Russian state media has also regularly published content critical of other countries’ public health measures (despite Russia instituting many of the same measures), as well as content meant to undermine public confidence in the safety and reliability of vaccines (despite Russia’s aggressive promotion of its domestically produced Sputnik V vaccine). While this trend is apparent across most if not all of Russia’s state-run international broadcasters, RT Deutsch has found disproportionate “success”—as measured by engagement metrics—promoting content skeptical of vaccines, masks, lockdowns, and other coronavirus mitigation measures. For example, before RT Deutsch’s channel was removed by YouTube, nine of its ten most viewed videos since March focused on narratives critical of vaccines, including multiple videos suggesting that vaccines were part of a “huge experiment.” On Twitter, nearly all the most retweeted RT Deutsch tweets mentioning vaccines or vaccinations focused on adverse reactions to vaccines, including deaths. 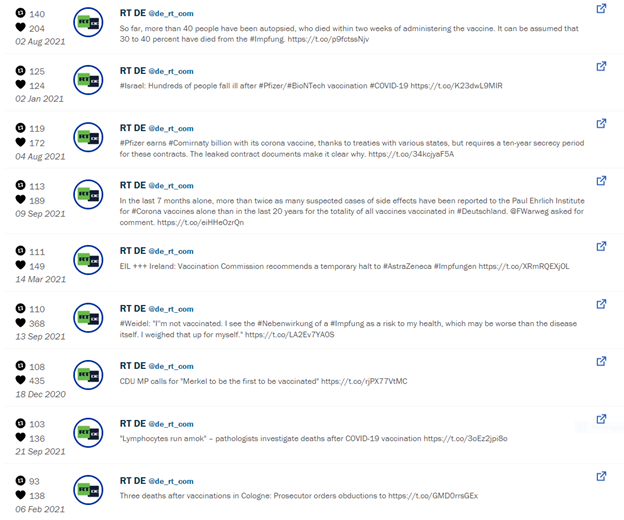 To understand where RT Deutsch content is being shared and consumed, we used CrowdTangle to query every RT Deutsch video with more than 400 likes and every article with more than 4,000 likes on Facebook between March 15 and September 23, 2021. CrowdTangle returned more than 1,000 public groups or pages that shared at least one queried RT Deutsch article or video during the studied period. Besides RT Deutsch’s own Facebook page, the two most active spreaders of RT Deutsch content were groups entitled “Widerstand gegen den corona-wahn” (Resistance to the Corona madness) and “Ich misstraue der Regierung!” (I mistrust the government). 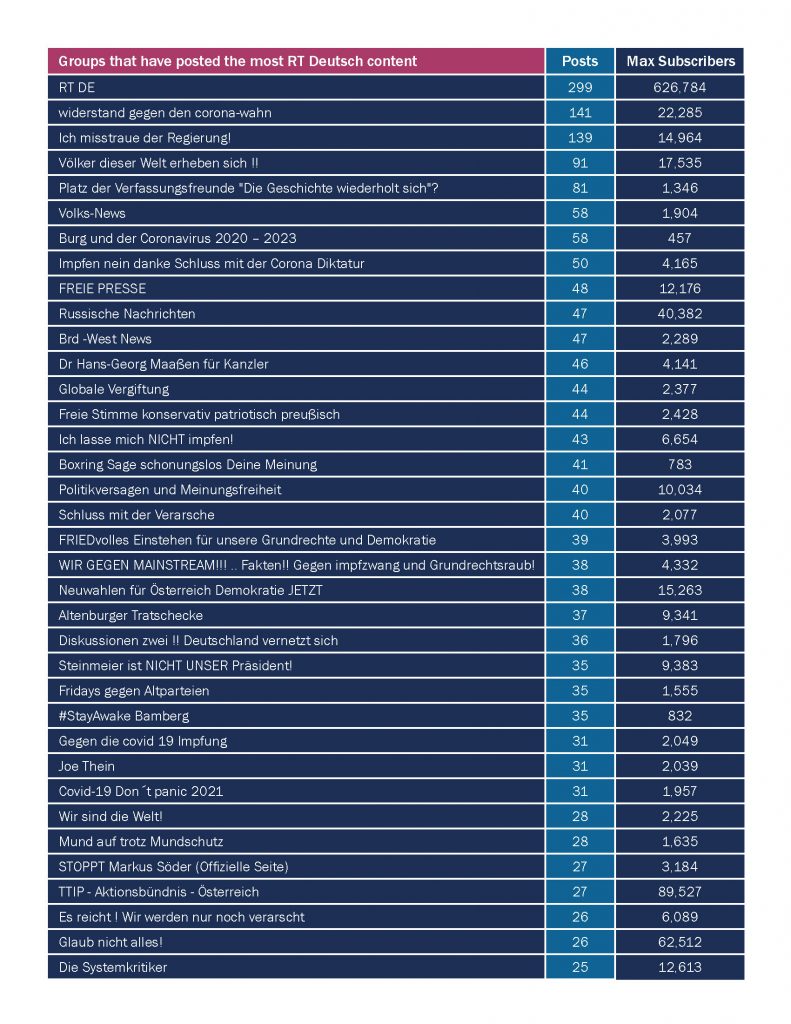 Of the top 100 Facebook pages and groups that were most active in sharing RT Deutsch content, more than 20 percent featured names that explicitly reference opposition to vaccines or other coronavirus public health measures—for example,” Impfen – NEIN DANKE!” (Vaccines – no thanks!)—or support for the Querdenken movement (3 groups). This total does not include many groups and pages that suggest broader opposition to the government or mainstream media, like “Glaub nicht alles!” (Don’t believe everything!), or coded support for conspiracy theories, like “Folge dem Plan” (Follow the plan). A manual review of these groups found that nearly all were active in promoting anti-vaccine, anti-mask, or anti-lockdown narratives. Of groups that referenced a specific political party or movement, the AfD was the most mentioned (6 groups), followed by German offshoots of the yellow vest movement, like “Netzwerk der Gelben Westen” (Yellow vests network). Fittingly, one of the most common words in the names of the public groups and pages that shared the most RT Deutsch content during the studied period was gegen (against), highlighting RT Deutsch’s strong appeal with groups opposed to both public health measures and the institutions (media and government) that support them. 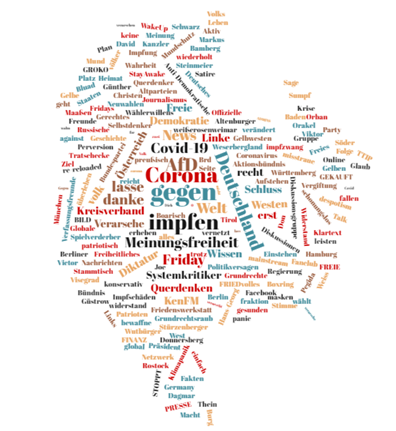 A word cloud of the most mentioned words in the names of public groups and pages that shared the most RT Deutsch content between March 15 and September 23, 2021.

Analysis of the narratives promoted by and audiences receptive to RT Deutsch over the past year shows a clear connection between anti-vaccine sentiments and the growing popularity of RT Deutsch across multiple social media platforms. This fact alone does not, of course, warrant the removal of RT Deutsch’s social media properties, as there are many other fringe and mainstream media outlets that have also promoted mis-, dis-, or mal-information about vaccines. (Again, it bears repeating that RT Deutsch’s suspension was due to the promotion of coronavirus misinformation; their removal was a result of them clearly violating YouTube’s rules against posting to other channels during a suspension). But Moscow’s continued efforts to frame YouTube’s decision as anti-Russian censorship belies the fact that RT Deutsch is not, by most any definition, an outlet that promotes Russia’s interests—unless those interests are defined by a persistent effort to undermine global efforts to contain the coronavirus pandemic.