As the votes were counted in the 2020 U.S. election, blacklisted China-registered technology company Huawei positioned itself on Twitter as a steadfast vendor in European markets regardless of the election results. The common narrative within these tweets was that no matter the outcome of the 2020 U.S. elections, Huawei would stand by European partners. The tweets referenced former U.S. presidents, the White House, Joe Biden, and Donald Trump, and stated that “the EU has been a strong global player.” 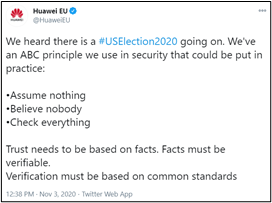 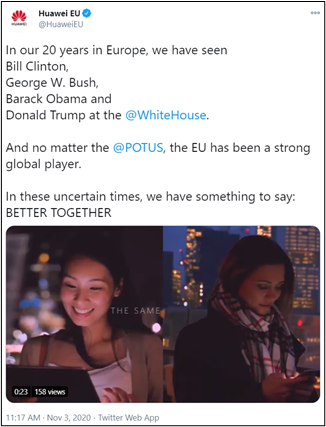 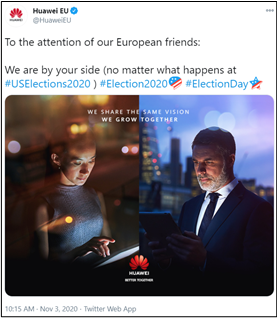 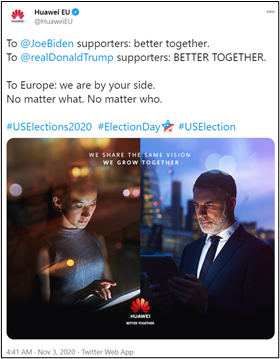 This series of Election Day tweets was not the only way that Huawei weighed-in on U.S. politics in front of a transatlantic audience. Huawei sponsored the last two episodes of Politico Europe’s “Campaign Confidential” podcast—one episode the week of Election Day, and another the following week. This podcast was a “pop-up series on the U.S. elections” and featured Huawei advertisements with narratives similar to the tweets, including “governments may come and go, but Huawei is here to stay.” Huawei positioned itself to be by Europe’s side, “No matter what. No matter who.”

Huawei’s promotion of friendly narratives in Europe in conjunction with the 2020 U.S. elections was a part of a wider campaign to burnish its brand globally. But, as ASD Emerging Technologies Fellow Lindsay Gorman has argued, the inclusion of equipment made by “Huawei into national 5G networks would represent an unacceptable security risk” for the United States and its European allies.