On September 17, 2020, the assistant secretary of European and Eurasian affairs at the State Department told the Senate Committee on Foreign Affairs that “Europe has emerged as arguably the central front in the Chinese Communist Party’s efforts to supplant U.S. global leadership.” Illustrating this analysis, Chinese state media and diplomats have been hard at work portraying last Monday’s virtual summit between Chinese Communist Party Chairman Xi Jinping and European leaders as a testimony to the strength of EU-China ties, despite most European commentary pointing to the summit’s failure to deliver anything of value.

In the days before and after the virtual summit (September 13-15), the European Union was the third most mentioned country (or special territory) by Chinese accounts monitored on the Hamilton dashboard. The summit was the focus of more than half of the most engaged with tweets mentioning the EU. By comparison, the EU was only the eighth most referenced country when looking at results over the past 30 days, suggesting an increased focus on the EU around the summit. 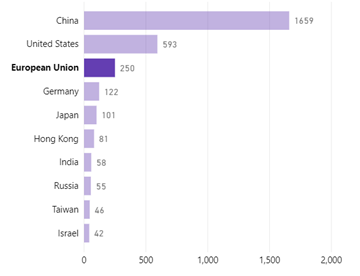 Mentions of the EU between September 13-15 by official Chinese accounts and state media.

On the diplomatic side, the Twitter account of the Chinese Foreign Ministry summed up Beijing’s version of events: 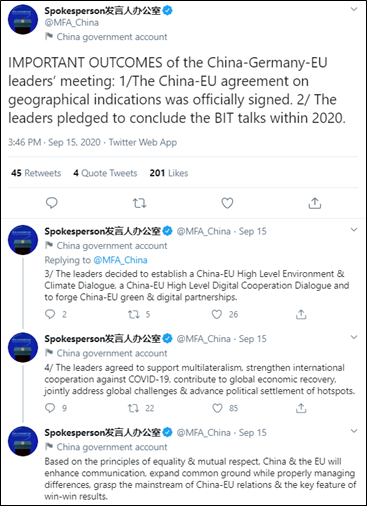 As the opening line makes clear, the Chinese government wanted to frame this summit as a success that yielded substantial advances. And to highlight the contrast between Beijing and Washington, the Ministry of Foreign Affairs’ account focused on topics like climate change and multilateralism that have become irritants in the transatlantic relationship.

Some of the Chinese commentary surrounding the virtual summit made Beijing’s intention to drive a transatlantic wedge even clearer. CGTN arm T-House, Ministry of Foreign Affairs Spokesperson Hua Chunying, and the editor-in-chief of China Daily’s Europe bureau, Chen Weihua, all offered variations on the idea that the United States is at best an unreliable partner, but perhaps more likely, it is an overbearing bully:

For the most part, Chinese state media were upbeat about the summit. Their most-shared article on Facebook related to the virtual summit was CGTN’s “Xi Jinping: China, EU should be committed to multilateralism, dialogue.” Even more optimistic, China Daily went with “China, EU to boost strategic partnership.” Similarly, the day after the summit, CGTN America published two video segments emphasizing the strong ties between Beijing and Brussels: 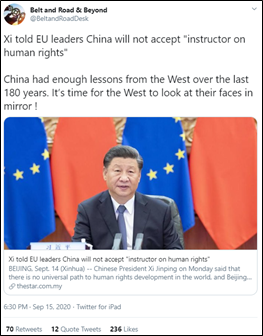 However, some of the accounts monitored by Hamilton had a slightly less conciliatory view of the summit, particularly around issues of human rights:

And despite CGTN proclaiming that China is “willing to make arrangements for an independent visit to the Xinjiang Uygur Autonomous Region at the request of the European Union,” an editorial in the nationalist tabloid Global Times warned, “Gone is the era when the West could lecture China easily.”

After Chinese Foreign Minister Wang Yi toured several European capitals earlier in September 2020, Xi’s personal participation in the virtual summit with EU and German officials shows Beijing’s determination to mend bridges after its obstructive actions during the coronavirus crisis alienated much of the continent. However, Chinese authorities’ failure to deliver concrete results on issues such as the EU-China investment treaty, the persecution of Uighurs in Xinjiang, and the steady assault on civil rights in Hong Kong is cause for growing skepticism throughout Europe. More than anything Washington may or may not do, these days Beijing’s hostile actions are what is pushing Brussels to seek ever closer transatlantic cooperation.