Hamilton Analysis: A Tale of Two Protest Movements: Russian, Iranian, and Chinese Coverage of Protests in Belarus vs. the United States

On August 9, Belarusian President Alexander Lukashenko declared a landslide victory in an election widely regarded to be neither free nor fair, sparking widespread protests across the country. Since that time, Russian, Chinese, and Iranian officials and state media have, to varying degrees, thrown their support behind the embattled president and either denounced or strategically ignored the pro-democratic protests. The coverage, or lack thereof, afforded to the Belarusian protests contrasts sharply with each countries’ recent coverage of racial justice protests in the United States, particularly in the aftermath of the shooting of Jacob Blake, a Black man, in Kenosha, Wisconsin. The different narrative frames reflect Russia, China, and Iran’s respective bilateral relations with the United States and Belarus, and, perhaps more acutely, their universal aversion to popular protests—except when those protests take place in democratic countries.

Between August 9 and September 4, Belarus was the third most-mentioned country by all Russian state media and government and diplomatic accounts monitored on Hamilton 2.0, and #Belarus was the eighth most-used hashtag. In addition, monitored Russian accounts mentioned “Lukashenko” in just under 1,700 tweets. In total, Belarus-related content accounted for roughly 7 percent of official Russian Twitter outputs during the specified date range.

On Russian state-backed websites, there were 338 articles mentioning Belarus, making it the third most-mentioned country in written articles. There were also three videos posted to RT America and RT UK’s YouTube channels. Almost all Belarusian-related content focused on the election or subsequent protests.

Jacob Blake was shot by police in Kenosha, Wisconsin, on August 23, making it is difficult to select a date range that would equally weigh the coverage of the two protest movements. Also, protests in the United States were more diffuse (i.e., related but different incidents were the cause of protests in many major U.S. cities, including Kenosha, Portland, Louisville, and Rochester, during the specified date range). That, coupled with the fact that, unlike Belarus, most mentions of the United States in tweets over the past four weeks were not related to various protests, makes it more difficult to isolate and quantify activity related to racial justice and counter protests in the United States.

Using August 9 as the starting point, however, data from the dashboard indicates that when monitored Russian accounts used the word “protest,” it was more commonly associated with Belarus than the United States, as evidenced by related hashtags.  The reverse was true for monitored Chinese and Iranian accounts. 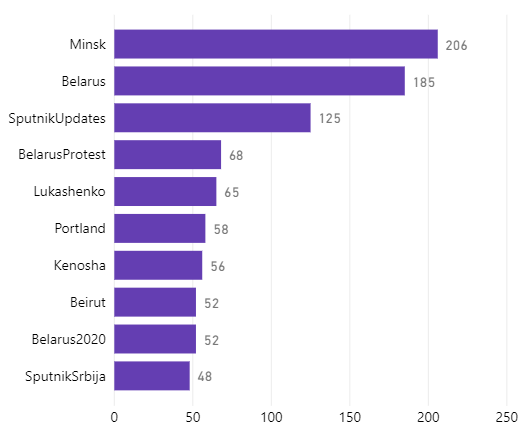 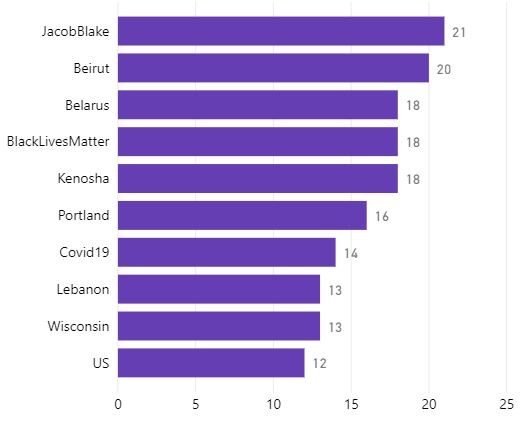 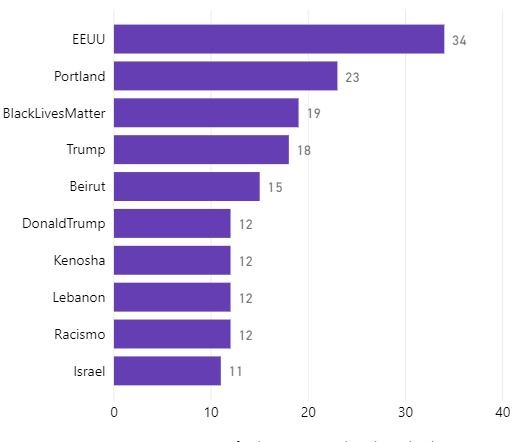 Coverage of Protests in Belarus

The day after the election, Russian and Chinese government Twitter accounts noted that their respective presidents had congratulated Lukashenko on his “victory.” This contrasted starkly with the reaction of the European Union, which did not recognize the election results and condemned the actions of the Lukashenko government.

As protests intensified in the days after the election, Russian state media—especially Russian-language media outlets—reported allegations by Belarusian authorities that the protesters were receiving financial incentives and other support from the West. Between August 9-September 4, Russian diplomatic and media accounts used the word “interference” in at least 80 tweets mentioning protests in Belarus, amplifying official statements from the Kremlin:

The parroting of Russian talking points was also evident in Iranian messaging, with PressTV and other Iranian state-backed outlets amplifying the Russian perspective on the protests:

Although all three countries’ media outlets mentioned the opposition protests, there were few references to the violence and brutal crackdown by authorities. Chinese state media mentioned “violence,” “crackdown,” or “brutality” in only 10 tweets mentioning Belarus over the past month. Neither word was mentioned in Belarus-related tweets from Iranian official accounts. Monitored Russian accounts used the word “violence,” “crackdown,” or “brutality” in 78 total tweets, though some of those tweets were quoting EU officials or blaming the West for the violence. Several articles also blamed Western media bias and claimed that the U.S. election will be more rigged than Belarus’, suggesting that criticism of the Belarussian government was unwarranted and hypocritical:

However, it is important to note that a few RT-affiliated Twitter accounts that openly court progressive audiences—particularly in the United States—did condemn the police and government response in Belarus. RT America and RT UK’s YouTube channels—both of which court left-leaning audiences—focused on global solidarity protests and criticized “strongman” Lukashenko. This points to Russia’s ability to target different messages to different audiences—a feature of Russian state-backed messaging that sets them apart from their Chinese and Iranian counterparts. 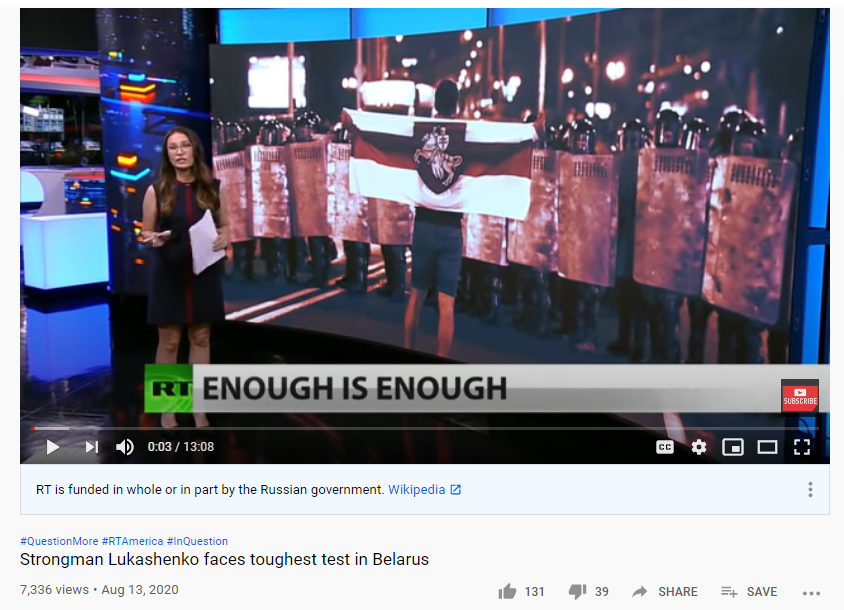 Coverage of Protests in the United States

The tone of the coverage afforded to racial justice protesters in the United States was more sensationalized and, particularly in the case of Iran and China’s outputs, more supportive of the protesters than comparable coverage of protests in Belarus. In particular, Chinese, Iranian, and Russian government officials and state media often tagged protest-related tweets with #BlackLivesMatter or #ICantBreathe hashtags—often used as a sign of solidarity with the protesters. In the specified date range, #BlackLivesMatter was used 65 times by monitored Iranian accounts, 49 times by Russian accounts, and 45 times by monitored Chinese accounts. There was no evidence that any account from the three monitored countries used #немойпрезидент (“Not My President”), #she4Belarus, or any other hashtag campaign associated with the protesters in Belarus:

There was also more emphasis on violence and systemic societal problems in coverage of the protests in the United States, particularly from Chinese and Iranian state media and diplomats. More than 50 protest-related tweets from Chinese accounts mentioned “violence,” “brutality,” or “crackdown” (compared to 10 uses in tweets referencing protests in Belarus), and Iranian official accounts used those terms in more than 20 tweets (compared to none in tweets referencing protests in Belarus). Iranian officials and state media in particular hammered the U.S. response to the protests in both written and cartoon form, in a clear departure from their near total silence about the treatment of protesters in Belarus:

That Russian government officials and Kremlin-backed media covered the protests in Belarus significantly more than their Chinese and Iranian counterparts is hardly surprising given the proximity and geopolitical importance of Belarus to Russia. It is also not particularly surprising that Iranian and Chinese accounts and outlets strategically ignored pro-democratic protests in Belarus, while amplifying racial justice and anti-government protests in the United States. The imbalance, not only in the volume but also the tone and focus of the coverage afforded to the two different protest movements, speaks to clear hypocrisy in how Russian, Iranian, and Chinese state-backed media and diplomats cover protests in authoritarian versus democratic countries. The irony is that those same outlets and diplomats frequently criticize Western media and governments for, essentially, doing the same thing in reverse.

It is also unsurprising that Russian state-backed media and diplomats attempted to discredit the protesters in Belarus as being guiding by “external forces”—a claim that is ubiquitous in their messaging related to other regional protests. (Note: suggestions of foreign interference in U.S. internal issues are dismissed as evidence-free allegations or anti-Russian hysteria).

What is perhaps more surprising is the extent to which Russian talking points were directly adopted by Chinese and Iranian state media and diplomats. The circular amplification between the three networks is a feature that we have previously identified; however, the fact that China and Iran largely cited Russian sources in their coverage of protests in Belarus was notable.

Finally, it is worth highlighting the differences in each country’s information strategy. Russia’s efforts to flood the zone with anti-Western talking points in its coverage of the protests in Belarus stood in stark contrast to China and, especially, Iran’s strategic silence on the protests. In addition, the fact that some Kremlin-affiliated accounts did, in fact, criticize the Belarusian authorities’ response to the protests speaks to their ability and willingness to court different audiences with different messages—even if those messages at times contradict the official Kremlin-line. This is also a feature used in Russian messaging on Jacob Blake and racial justice protests, where both liberal and conservative audiences’ grievances were stoked and amplified.

While each country’s outputs reflected their differing strategic goals and capacities, one constant across the three networks was the use of the U.S. government as the central villain in coverage of protests at home and abroad—a feature which is evident in messaging on almost every topic of note.