The Methodology of the Hamilton 68 Dashboard

The Hamilton 68 Dashboard, hosted by the Alliance for Securing Democracy, tracks Russian influence operations on Twitter. The following document explains exactly what the dashboard shows and the methodology used to construct it.

The dataset is properly understood as a network of accounts linked to and participating in Russian influence campaigns. Modes of participation include both knowing and unknowing participation. The composition of the list is discussed in more detail below.

The 600 accounts are monitored in real time, and the output from their accounts is analyzed to produce the dashboard. There are three primary categories of data, each of which is analyzed in two different ways. The categories are:

Each of these categories are then analyzed in the following ways:

While the users in the network generally serve to promote Russian influence themes, the content within the network is complex and should be understood in a nuanced way. There are three broad categories of content documented by the dashboard:

We cannot at this time offer a breakdown of the relative amount of content from each of these categories, although we may pursue this question in future analysis. Nevertheless, three important caveats contained in the description above are worth emphasizing:

The monitoring list is based on analysis conducted over the course of roughly three years, with the specific networks identified over the last year. The networks were revisited, updated and the list finalized in the summer of 2017. The three networks are based on the following criteria:

Each of the above networks consisted of thousands of accounts. In order to identify the most relevant accounts for each, we employed social network analytical techniques largely developed by J.M. Berger and Jonathon Morgan. These techniques have been previously published, with a detailed description of the relevant methodologies in the following papers, both of which are freely available online:

A brief summary of the methodologies follows. After a network was identified based on the criteria above (for instance, “accounts that tweeted a specific piece of disinformation”), the users were analyzed using weighted metrics. Each of these metrics is a score that correlates to how an account in the network is similar to the accounts that seeded the network. The metrics were tested by extensively coding results, as detailed in the papers linked above. The metrics employed to create the monitoring lists included the following criteria:

In addition to the metrics above, which are described in detail in the linked papers, we also employed a Fast In-Groupness/IQI metric devised by Morgan and Berger subsequent to the previous publications. Because the full IQI requires lengthy analysis and data collection (weeks and sometimes months), we employed a machine learning algorithm based on existing IQI scores and coded results. The resulting metric can be calculated in considerably less time. The fast IQI was extensively tested against the full IQI and produced very comparable results.

In addition to the metrics described here, we also manually reviewed the final list in an effort to further eliminate any possible noise. As part of this review, we removed accounts using one specific social media application for automated tweeting. In our evaluation, this network requires further study before we can fully assess its relationship to Russian influence operations.

Identifying bots and cyborgs (bots which feature periodic human intervention) is a constantly evolving process. There are many different types of bots. Some are relatively simple, others are more sophisticated. No single approach is adequate to identify all of the different types.

We identified bots in this network using a new Influence-Outlier metric recently developed by Berger. Within Russian influence networks, we had frequently observed accounts which were disproportionately engaged with other accounts in the network relative to their follower counts. So for example, a user with 5,000 or 10,000 followers might be ranked among the top 10 influencers in the network, alongside accounts with 100,000 or millions of followers.

A formula was developed to isolate these accounts, which we initially suspected were being amplified by retweets sent by bots.1 On further examination, we found this to be true, but we also found that many of these outliers appeared to be bots themselves, with some tweeting hundreds of times per day, primarily retweets, which were then further amplified by their followers. Several variations of the influence-outlier metric were employed to sift bot accounts from other networks related to Russian influence, and then the bots themselves were used to seed a network, which was subsequently scored using the fast IQI metric. 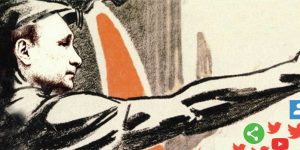