Russia’s Spanish-language social media accounts have consistently punched above their weight, with follower numbers and engagement totals far outpacing those of Russia’s other external facing messengers. The success of Russia’s Spanish-language outlets has even drawn the attention of US lawmakers, who last month urged Meta, Twitter, and Telegram to crack down on Russian state media accounts targeting Spanish speakers in the Western Hemisphere. While Russia’s Spanish-language content remains popular, data collected on ASD’s Hamilton 2.0 tool and Facebook’s CrowdTangle tool show that some of Russia’s most influential Spanish-language accounts have been hit hard by platform restrictions. For these accounts, like RT en Español, initial engagement spikes at the start of the war have been followed by months of persistent decline. New media accounts and accounts for individual journalists have started to make up for that lost engagement, though, and Russia’s Spanish-speaking diplomats have seen significant growth. Some diplomats are now as visible on social media as state-backed outlets, raising questions about the efficacy of policies that treat state-funded media and state officials differently. 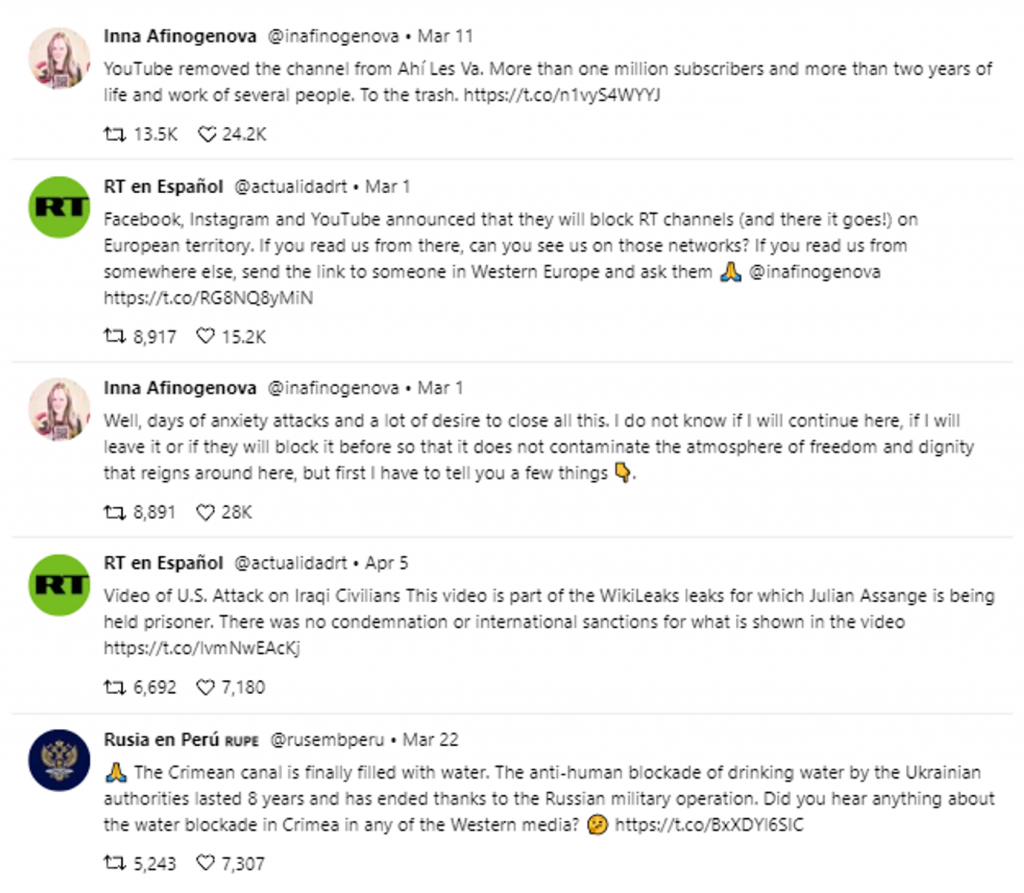 The five most retweeted Spanish-language posts by Kremlin-linked accounts between 2/24/22 – 7/23/22.

However, all the Twitter statistics on Russia’s Spanish-language media accounts are skewed by a massive spike in retweets and likes during the first month of the war. From February 24 to March 24, Russian Spanish-language state media and diplomatic accounts brought in more than a million retweets and nearly two million likes. The following month, retweets dropped by 38 percent and likes dropped by 37 percent. Every month since, Spanish-language accounts have drawn less engagement. This is likely the result of ephemeral interest in war-related content and Twitter’s policies to limit the reach of Russian state media on its platform. 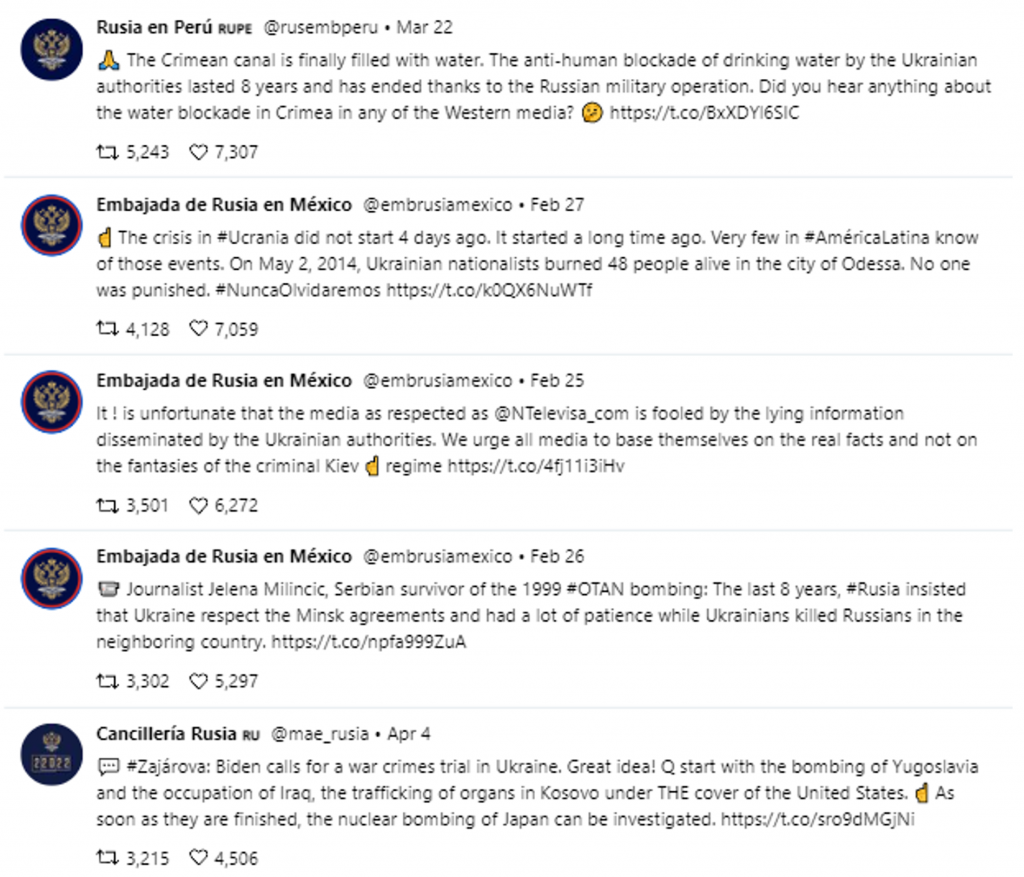 Most retweeted posts from Russian diplomats tweeting in Spanish between 2/24/22 and 7/23/22.

Unfortunately, issues with Facebook’s Crowdtangle data analysis tool made it difficult to determine the overall popularity of Russia’s Spanish-language content on the platform. ASD was unable to review statistics for RT en Español, which is generally the second most popular Russian state media page overall on Facebook (after RT Arabic) and by far the most popular Spanish-language Russian media page. However, the incomplete Crowdtangle data shows a decline in interactions with many Russian state media Spanish-language Facebook pages since the war began.

For example, Sputnik Mundo, which is typically the second most influential Spanish-language state media page, earned 887,767 total interactions during the first month of the war. The next month, that number fell to 386,271—a 56 percent drop. It has seen loses every month since then. During the fifth month of the war, from June 24 to July 24, its total interactions were down 75 percent from its first month high. For multiple months, it has earned fewer interactions than it did during the same timeframe in 2021. 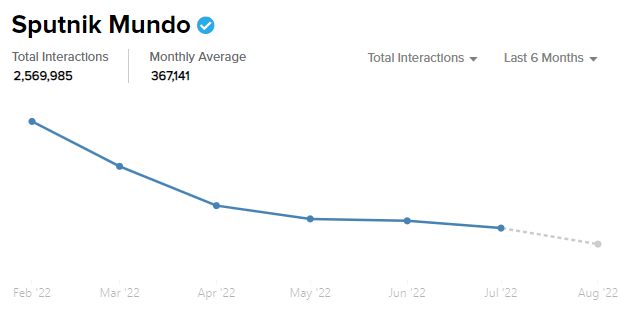 On the other side, the page for Ahí les Va, which became active three days before the war began and continues to operate without a state media label, has seen massive growth. During the first month of fighting, it brought in only 19,908 total interactions. By the fifth month, it was bringing in 80,553 total interactions.

Crowdtangle provided more complete data on Russian diplomatic pages, and, as with other platforms, diplomatic profiles have grown across the board since the war began. These pages averaged 18,459 total interactions in the first 150 days of war, which is more than double the amount they generated during the same period last year. Again, the Mexican Embassy enjoyed substantial growth, increasing its total interactions from 80,130 in the 2021 timeframe to 218,212 across the first 150 days of war. The Mexican Embassy’s page is now nearly on par with Sputnik Brasil, which had 291,065 interactions across the same 2022 period. Other pages, like the Embassy in Peru, also doubled their popularity but lagged well behind state media pages. 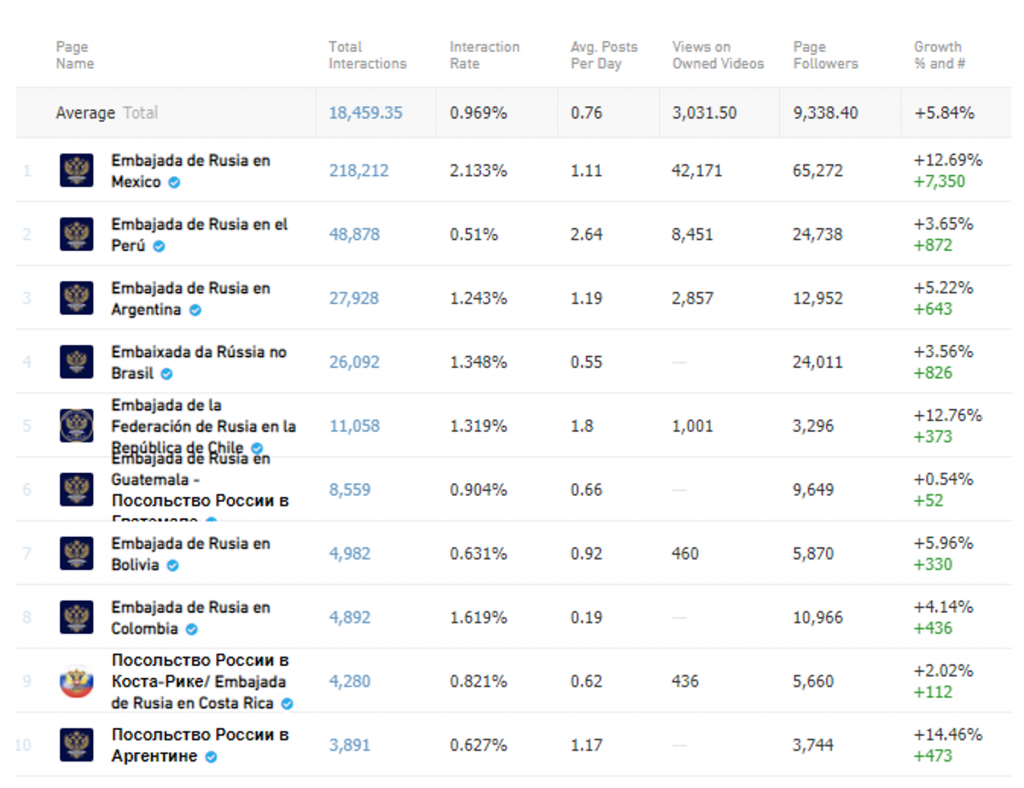 Data shows Russia’s Spanish-language accounts on Twitter and Facebook coming down from their early-war high but remaining as some of the Kremlin’s most powerful microphones. RT en Español is far and away Russia’s most influential Spanish-language Twitter account, earning millions of retweets and likes, but platform restrictions coupled with the public’s war fatigue have chipped away at the outlet’s popularity, as well as at the popularity of Russia’s Spanish-language media in general. Russian diplomats have not had similar issues. On both Twitter and Facebook, Russia’s Spanish-speaking diplomats have continued to build their reach. And as diplomats rise, state media accounts are working to get around platform restrictions, including by using alternative domains and by directing followers to new, unlabeled accounts, like Ahí les Va, and the accounts of state media personalities. Twitter, Facebook, and other platforms will need to keep pace with the Kremlin’s evolving propaganda tactics.