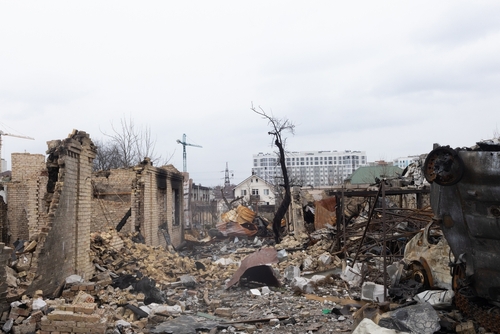 Russian diplomats and state media pushed a high-volume disinformation campaign to discredit reports that Russian troops had murdered citizens in the Ukrainian city of Bucha in April 2022. Kremlin-linked accounts tweeted about “Bucha” in more than 1,200 posts between April 3 and April 10, 2022. State media claimed that the Bucha massacre was a “fake attack” staged by actors. Diplomats suggested that the United States and NATO “ordered” the false flag operation to sabotage peace talks and to justify additional sanctions against Russia. Russia’s foreign intelligence service said the head of the U.K.’s MI6 spy agency, Richard Moore, might have planned the Bucha incident. Moscow-affiliated accounts also insisted that the Western media was an “accomplice” to the fake attack. At the same time, Russian propagandists claimed that the dead bodies were real but that the people had been killed by Ukrainian forces for supporting Russia. One diplomatic account put out a 16-tweet-long thread, which asserted that the chronology of events proved Russia’s innocence and that a Ukrainian neo-Nazi had ordered the killings in Bucha. Officials and state-backed outlets predicted that “Ukraine and its Western propaganda-tutors” were planning to stage another attack to blame Russia. The U.S. State Department and independent investigators have disproven Russia’s narratives around Bucha.

Country: Ukraine
Source: Source Source 2 Source 3 Source 4
We use cookies to analyze how visitors use our website and to help us provide the best possible experience for users.