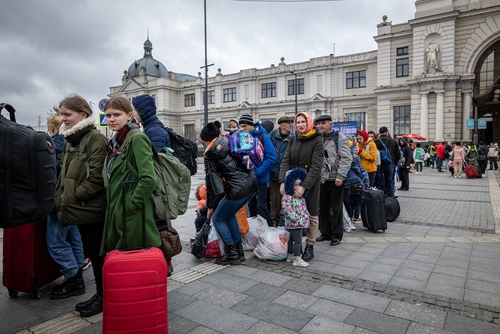 Kremlin-linked accounts issued a barrage of denials and unfounded counteraccusations after Ukrainian officials said Russian forces had killed dozens of civilians with a missile that targeted a train station in Kramatorsk. Russian diplomatic accounts claimed a Tochka-U missile was used in the attack and that only Ukrainian forces use that type of weapon. Investigators later found evidence of Russian forces using those missiles. Russian diplomats also argued that “any [social media] user with a basic understanding of physics” could see that the missile came from Ukrainian territory, and they asserted that the serial number on the missile proved it belonged to the Ukrainian army. The Russian Embassy in Canada said the “Kiev junta” had ordered “neo-Nazis” to carry out the “heinous crime.” That same post argued that Ukrainian President Volodymyr Zelensky was “controlled by the Western intelligence services to destroy the people of Ukraine.” Other diplomatic accounts argued that Ukraine wanted to “maximize the number of civilian victims” to prevent and deter people from fleeing the country because Ukrainian forces intend to use civilians as “human shields.”