On August 11, 2020, Russian President Vladimir Putin announced that Russia had approved the world’s first coronavirus vaccine, which it dubbed Sputnik V in reference to the Soviet Union’s famous orbital satellite—the world’s first in 1957. Russian state media and government officials touted this “breakthrough,” emphasizing positive claims about the vaccine’s safety and efficacy, as well as international demand for the vaccine. Moscow also pushed back against international criticism of the vaccine’s lax safety testing, accusing critics of Russophobia and withholding of information, while portraying itself as the benevolent leader in the fight against the virus.

Between August 8 and August 14, #vaccine was the sixth most-used hashtag by the Russian government and diplomatic accounts monitored on Hamilton 2.0. In total, close to 1,200 tweets from monitored accounts mentioned “vaccine” during the same period. 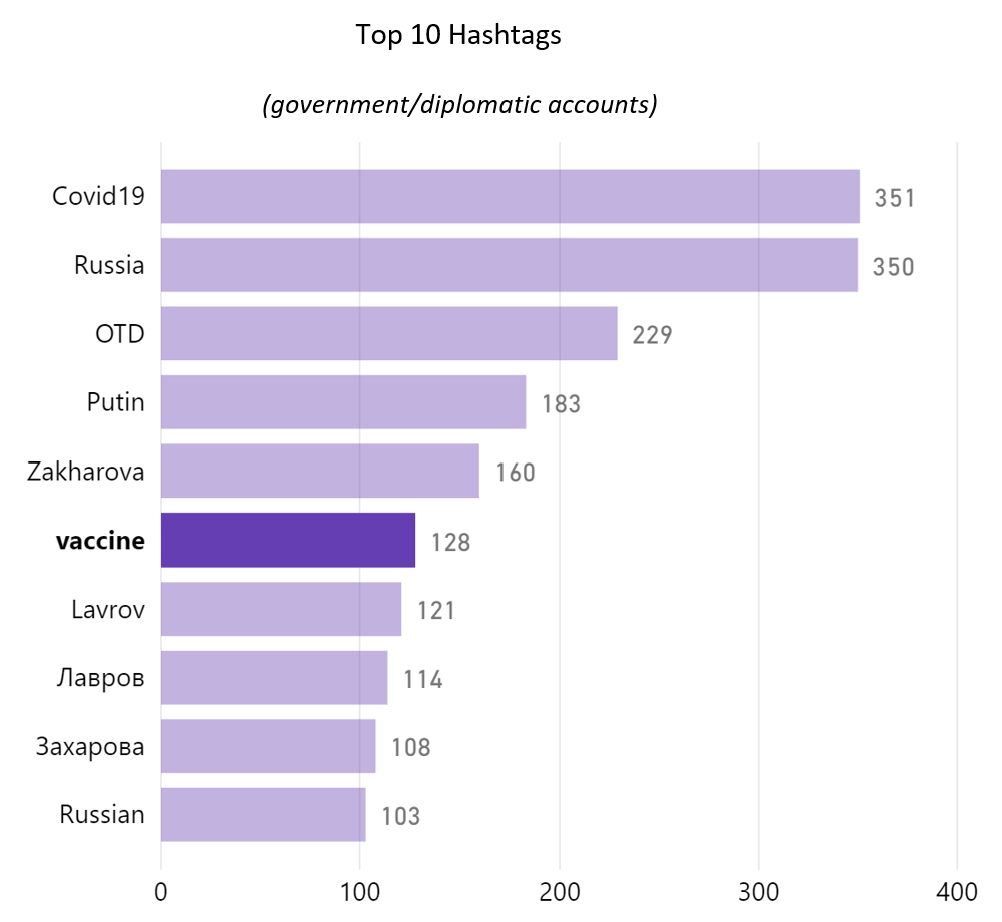 Accompanying the August 11 announcement, Russian state media and government officials celebrated being the first country to register a coronavirus vaccine, portraying Russia as the global leader in the race for a coronavirus cure. Russian patriotism was evident in much of the messaging, as diplomatic and state media accounts touted the development as not only a win for public health but also for the Russian state. Russia Beyond, for instance, capitalized FIRST in its headline, adding the tagline “made in Russia.” 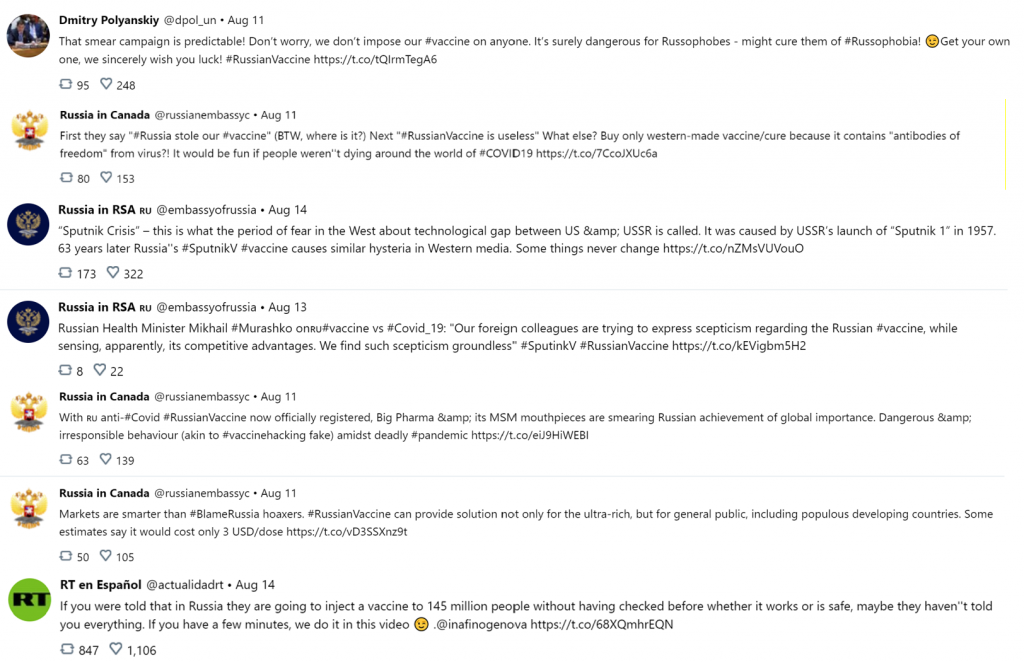 “On 11 August, Russia announced the world’s first vaccine for COVID-19, named ‘Sputnik V’, in a bid to curb the pandemic that has currently killed over 737,000 globally. International observers detail why the breakthrough development has been met with either silence or rejection from the Western press.”

“Top US health officials insist they’re holding out for a “safe and effective” Covid-19 vaccine, hinting that Russia’s shot is anything but – or even that it’s a plot to ‘goad the US into forcing early action on our vaccines.’ . . . ]. The Trump administration’s own vaccine development program, called Operation Warp Speed, has been criticized even by the country’s most fervent vaccine boosters for its “unsafe” timeline, which has contracted from an ambitious 18-month projected schedule to “maybe before the election.””

The article describes the vaccine’s official website, which claims to have been created “to fight the disinformation campaign about the vaccine launched by several international news outlets.”

The head of the Russian Direct Investment Fund, Kirill Dmitriev, also published an op-ed in Sputnik, which emphasized Russia’s desire for international cooperation and argued that “politics again stand in the way of the Russian technology, which can save lives around the world.” The outlet dramatically described the piece as “forbidden” after it was supposedly “rejected by all leading Western media” due to an alleged “blockade imposed on positive information about the Russian COVID-19 vaccine.” An RT America segment devoted to the topic took a similar approach, suggesting that the world had missed an opportunity to unite around the vaccine, that the West is jealous of Russia’s progress, and that approved British or U.S. vaccines would have been rushed to market for monetary reasons, rather than Russia’s supposedly benevolent motives.

As the coronavirus pandemic rages on globally, progress in treatment and vaccine development has commanded a massive degree of public attention and funding, and the first effective vaccine would represent a major milestone in this fight—as well as global influence for the first mover. It is not surprising that Russia, or any country, would seek to promote such progress. However, while Russia’s overt channels tout its accomplishment, promote an image of Russia as a benevolent savior, and decry the West’s Russophobia and alleged withholding of information, more covert Kremlin-linked websites have pushed false reports about deaths caused by a U.S.-made vaccine. This is consistent with Russian messaging around other public health and technology related developments, where narratives around Western advancements often stress (or manufacture) public health concerns while Russia’s efforts are deemed “safe” (see 5G coverage).