On September 18, 2020, the U.S. Department of Commerce announced that new restrictions would be placed on WeChat and TikTok, two social media apps owned by Chinese companies, effectively banning the apps from being downloaded from U.S. app stores (this restriction was later blocked by a district court judge). In subsequent days, reports surfaced that ByteDance, TikTok’s parent company, had reached a deal with Oracle and Walmart for its U.S. operations to satisfy Trump administration demands. But the reaction from China’s propaganda network to the moves was harsh and unequivocal, suggesting that Beijing may be reluctant to approve a deal that state media decried as “larcenous cronyism” and a “trap.”

From September 18 to September 24, #TikTok was the eighth most used hashtag by accounts monitored by Hamilton 2.0. There were also over 250 uses of the term TikTok, with Oracle and Walmart registering 50 and 73 mentions, respectively. 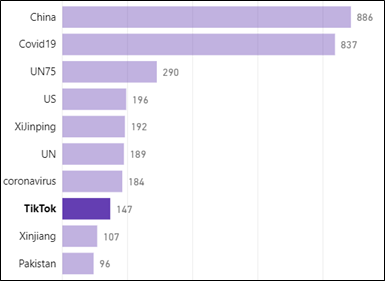 The majority of TikTok mentions came from state media and affiliated accounts; although, China’s diplomatic corps mentioned the app in 33 tweets. Interestingly, the most active diplomatic accounts on the topic were in Africa, with over half of the TikTok-related tweets coming from diplomats posted to South Africa.

A common refrain in China’s official messaging about U.S.-China tech disputes is the notion that the United States is using national security concerns as a pretext for harming China’s global business interests. This theme was particularly salient last week, with Chinese state media and diplomatic accounts labelling the Trump administration’s actions against TikTok “extortion” and a “gangster” tactic.

In response to the proposed deal between Oracle and TikTok to handle the data of U.S. users, CGTN, usually one of China’s more circumspect international outlets, ran a piece entitled “TikTok teens keep dancing, and a Trump buddy gets a contract.” China Daily was equally blunt in its assessment that “the situation in which TikTok finds itself is entirely due to the banditry of the White House.” And a September 23 editorial in People’s Daily stated, “Even in sheep’s clothing, a wolf is still a wolf. In the face of wolves, China can only survive through struggling!”

Yet reactions to the announcement of the TikTok deal with Oracle and Walmart were not universally negative, at least initially. In one of the most engaged-with tweets of the week, the editor-in-chief of nationalist tabloid Global Times, Hu Xijin, initially expressed muted support for the deal, albeit in the context of support for global data sovereignty. However, he reversed course a day later, calling the U.S. proposal of an Oracle-TikTok joint venture offensive to “China’s (…) dignity.”

Chinese state media also framed the restrictions as detrimental to the U.S. economy. In a series of segments posted to CGTN America’s YouTube channel, interviewees made similar points concerning restrictions on TikTok and WeChat, with one industry expert explaining, “In McDonald’s [in China], WeChat is the preferred payment system,” while another questioned “how [U.S. restrictions] will affect Apple’s bottom line.”

Chinese social media platforms, WeChat and TikTok in particular, frequently claim that they are fully independent from Beijing to placate concerns about their global dissemination of authoritarian censorship practices. While the Chinese government, at least publicly, has largely refrained from making public comments about Washington’s restrictions, the vitriolic reaction from the state’s propaganda apparatus suggests that Beijing is acutely involved in the dealings of a supposedly autonomous company. It also, perhaps, signifies that the Chinese government may be unwilling to bless the Oracle-TikTok arrangement, at least in its current form.