As has become the norm in moments of international crisis, the fallout from the killing of Maj. Gen. Qassem Soleimani last month unleashed a flood of disinformation onto social media. In crisis environments, where unconfirmed facts of even benign origin spread quickly, disinformation can be particularly effective at shaping popular narratives around events. In the weeks following the killing, beneath the noise of genuine speculation, pro-Iranian and pro-Saudi influence networks were active on English-language social media, where they mostly targeted the American far-Left and far-Right, respectively.

An Information Battle Heats Up

As the Iranian government condemned the killing in public statements, pro-Iran actors online quickly launched a sustained campaign of disinformation pushing several different narratives. Through its combined military and informational responses to the killing, Tehran may have tried to accomplish two goals simultaneously: convince Iranians and the world that it responded forcefully, while assuring the American security community that it did not seek further escalation, at least with respect to the conventional forces portion of the battlespace. The head of the Islamic Revolutionary Guard Corps (IRGC) Aerospace Force emphasized to Iranian journalists, “We did not intend to kill, we intended to hit the enemy’s military machinery.” The U.S. military has thus far rejected this interpretation.

At the same time as Iranian public officials emphasized the restrained nature of Iran’s military response, presumed pro-Tehran actors impersonated Israeli journalist Jack Khoury to claim on Twitter that “224 soldiers were taken to Tel Aviv Sourasky Medical Center Hospital” after the rocket attack on Ain Asad Air Base in Iraq. Days later, Iranian state media aired a segment from C-SPAN in which a “prank” caller claimed that his son was an American soldier killed by Iran’s missile strike. By promoting a narrative that Iran is acting with restraint in the face of American aggression, Tehran may hope to earn a measure of sympathy and (hopefully) avoid escalation in the physical battlespace — the one in which they can least effectively compete. A simultaneous narrative that the United States is covering up devastating casualties that resulted from a sophisticated attack on their bases, whether promoted by regime agents or merely regime sympathizers, can serve to increase Iran’s perceived power and prestige among those primed to distrust mainstream accounts of events.

We see a similar disconnect in the messaging surrounding the downing of Ukrainian flight 752. In the first few days after the crash, pro-Tehran Twitter accounts aggressively promoted allegations that the plane had suffered a mechanical failure and the United States was blaming Iran to protect Boeing’s reputation. 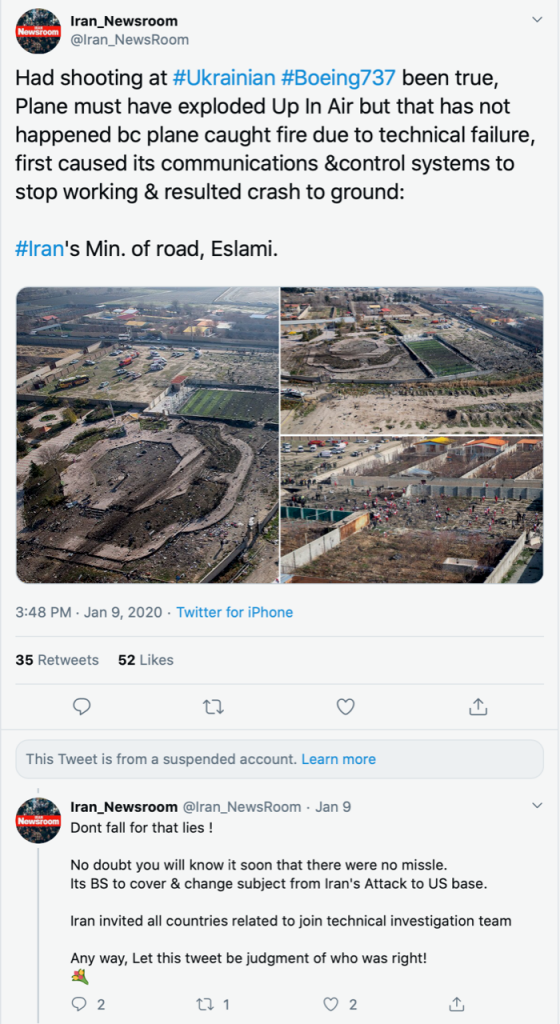 Now that the government of Iran has admitted that the IRGC shot the plane down accidentally, the networks of accounts that had been blaming Boeing for the accident have begun to promote the theory that American electronic warfare aircraft hacked into Iranian air defenses and tricked them into shooting it down. More recently, Russian Foreign Minister Sergei Lavrov seemed to endorse the unsupported theory advanced by some pro-Tehran accounts on Twitter that U.S. fighters had spooked Iranian air defenses into downing the plane by flying into Iranian airspace.

Pro-Tehran coordinated inauthentic activity appears to have grown in magnitude and sophistication in recent years. Though long adept at traditional propaganda, the use of fake personas in order to a) promote views hostile to Washington, b) promote views hostile to Riyadh, c) promote views favorable to Tehran, and d) sow distrust and confusion through false stories about current events constitutes a more comprehensive influence operation, possibly modeled after Russian efforts. In the past two years, these efforts have included attempts to stoke hostilities between Saudi Arabia and the United States and foster anti-Israel and anti-Saudi sentiment among Americans, and they have often featured left-wing, anti-imperialist, or anti-Trump themes. In many cases, pro-regime Iranian actors attempt to either impersonate or dupe legitimate journalists in order to promote outlandish stories.

Iran Is Not the Only Actor Driving Disinformation around the Crisis

After Soleimani’s killing, Saudi disinformation operations increased their tempo as well. On January 5, the Iraqi parliament voted to expel U.S. forces from the country. In the following days, a campaign around the hashtags #I_am_Iraqi and #Parliament_doesn’t_represent_me began to proliferate on Twitter. The campaign was soon traced back to a network of pro-Saudi puppet accounts working to fabricate a pro-U.S., anti-Tehran grassroots movement in Iraq. Like other Saudi campaigns, it also featured pro-Trump content, including many variations on #Make_Iran_Great_Again, while advancing right-wing conspiracy theories.

As with Iran, these tactics build on an information operations capacity that Saudi Arabia has ramped up over the past several years. In August, Facebook identified and removed pages and accounts associated with two pro-Saudi campaigns of coordinated inauthentic behavior, and in December, Twitter removed 88,000 accounts associated with a pro-Riyadh effort to sow confusion about the murder of Jamal Khashoggi, advance pro-Saudi and pro-royal family narratives, and denigrate the Iranian regime and its support for the Houthi rebels in Yemen. Like Iranian and Russian disinformation campaigns, Saudi disinformation has also used political fissures in the United States to gain attention and viewership on social media.

Part of what makes disinformation particularly pernicious in a crisis atmosphere is that controversy and ambiguity camouflage it well. Many Americans on the political left are angry about Soleimani’s killing for reasons that have nothing to do with Iranian disinformation. Many on the political right are hostile towards Iran for reasons unrelated to Saudi disinformation. Most disinformation is a mixture of fact and fiction; though pro-Tehran actors have worked hard to fabricate a narrative of widespread, garment-rending, spontaneous grief over Soleimani’s death, there are certainly Iranians who genuinely mourn him. And while pro-Riyadh operatives appear to have been behind #I_am_Iraqi and #Parliament_doesn’t_represent_me, there are some Iraqis who genuinely celebrated Soleimani’s killing.

In the course of identifying coordinated foreign efforts to influence discourse, it is important not to delegitimize the wide diversity of opinions on foreign policy earnestly held by millions of Americans, Europeans, Iraqis, Iranians, and Saudis of many political stripes. Instead, publicly identifying patterns of state-supported inauthentic activity offers media consumers the opportunity to better contextualize surprising or suspicious content they encounter in the information ecosystem.

Many tools and techniques that were once associated with particular actors and regimes are now widely used by many different groups promoting different worldviews. Because most approaches to disinformation can be leveraged in service of a wide range of ideologies, we can expect to continue to see the most effective disinformation operations imitated and refined by other actors, and we can expect to see the overall breadth and sophistication of such operations continue to increase as a result.