China’s state-backed messengers are using India’s health crisis to denigrate the United States and encourage India to step back from its deepening partnership with the United States and other democracies. According to data from the Johns Hopkins University, daily Covid-19 cases in India have exceeded 300,000 since April 21. As Indian authorities struggle to stem the tide of new cases, Chinese government officials and state-backed media see the health crisis as an opportunity to mend relations. To alleviate strains caused by last summer’s border clashes and to drive a wedge between India and its democratic partners, Chinese government officials and state-backed media are portraying China as a friend, while denigrating the United States as an opportunist.

Through messaging and narratives about India’s coronavirus outbreak, Chinese officials and state-backed media have portrayed China as India’s friend. In the last week of April, Hua Chunying and Zhao Lijian, the two most prominent spokespeople for the Chinese Ministry of Foreign Affairs, both tweeted out their government’s support and willingness to help. 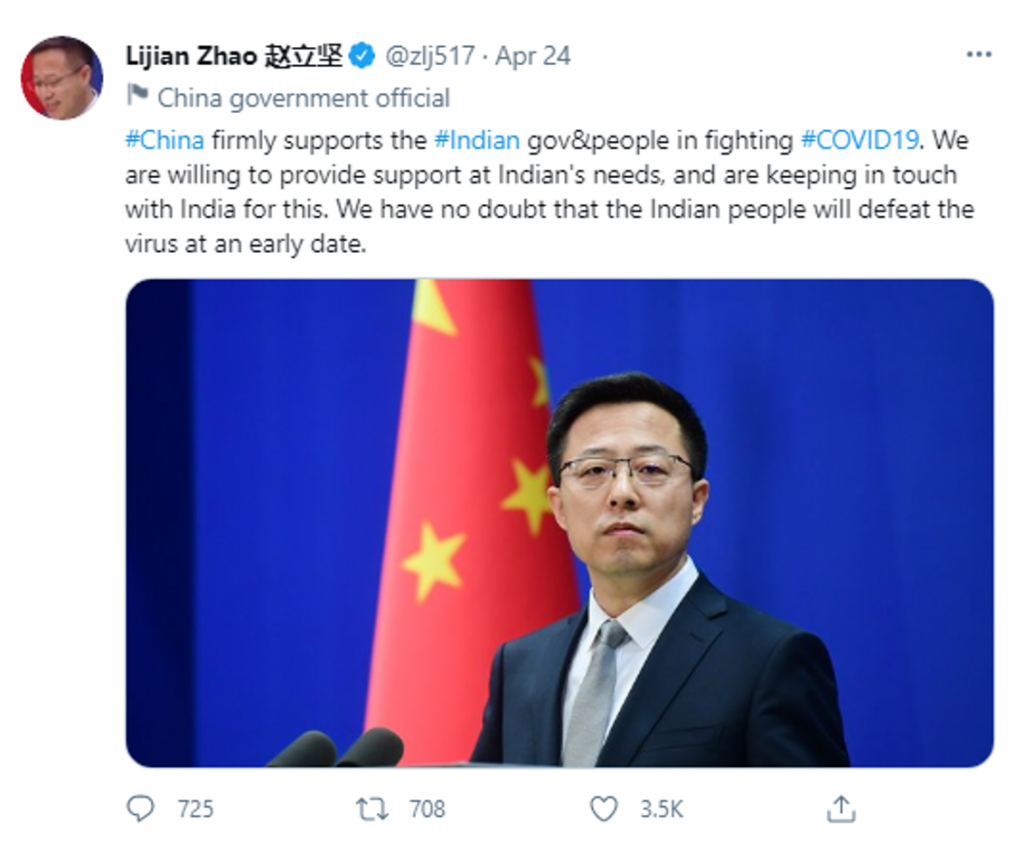 Coverage of the public health crisis alternated between content portraying the situation as uniquely grim and content promoting China’s providential assistance. This phenomenon is neatly illustrated by the most watched Chinese state-backed media YouTube video and the most retweeted tweet mentioning India between April 20 and April 30. 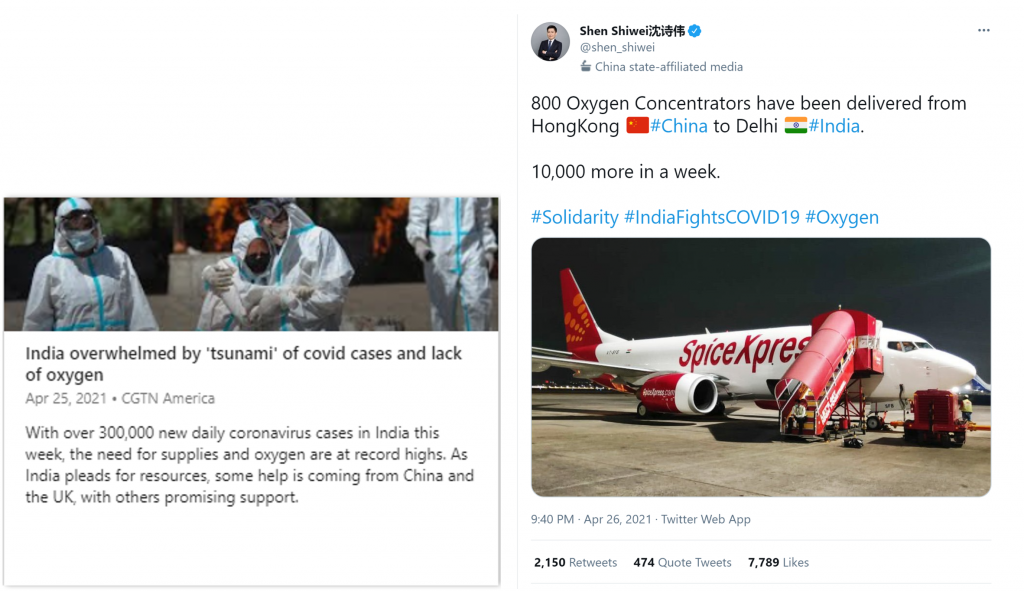 In parallel to its promotion of its own goodwill gestures towards India, the China’s state-backed messengers also sought to portray the United States’ response, or lack thereof, as selfish and inadequate, particularly when compared to China’s.

Even after the Biden administration committed its support to India, China’s state-backed messaging continued to paint U.S. help as sub-standard, hypocritical, and motivated by self-interest. 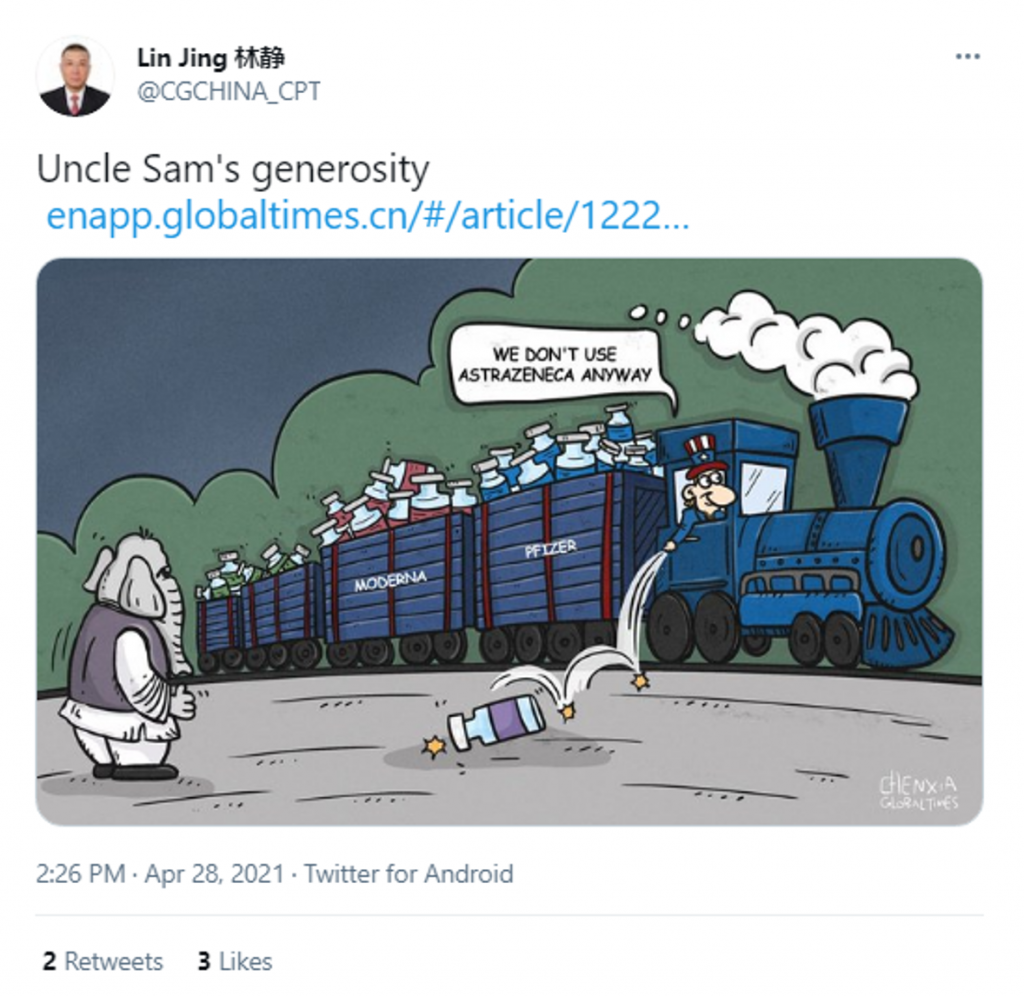 Much of China’s messaging also attempted to undermine the deepening strategic partnerships between India and other democracies. Several comments were aimed explicitly at the rapprochement between India, Australia, Japan, and the United States in the Quadrilateral Security Dialogue. 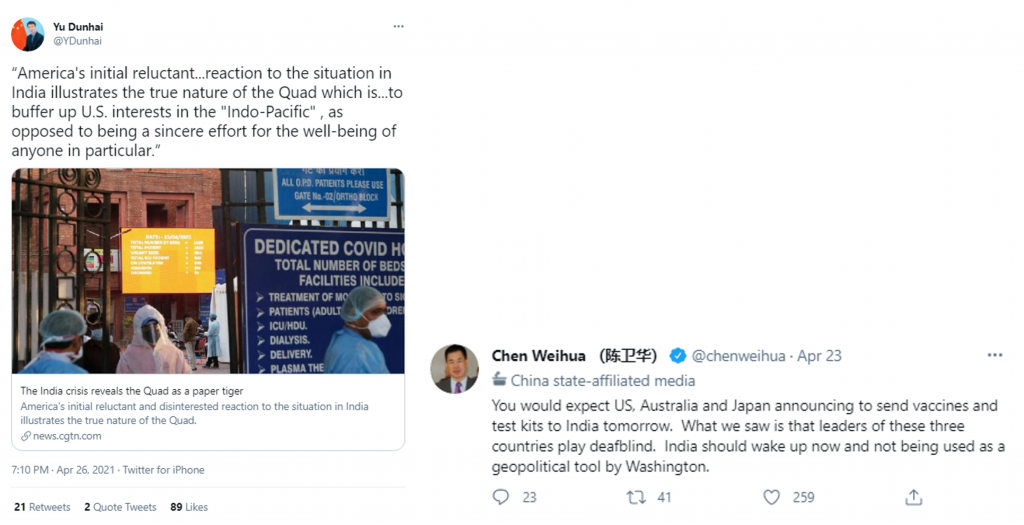 In the last ten days of April, Chinese diplomats and state-backed media covered India’s public health crisis significantly more than their Russian and Iranian counterparts. This discrepancy in coverage was particularly noticeable in the days before and after President Biden’s April 25 announcement that the United States would provide coronavirus aid, including vaccines, to India. 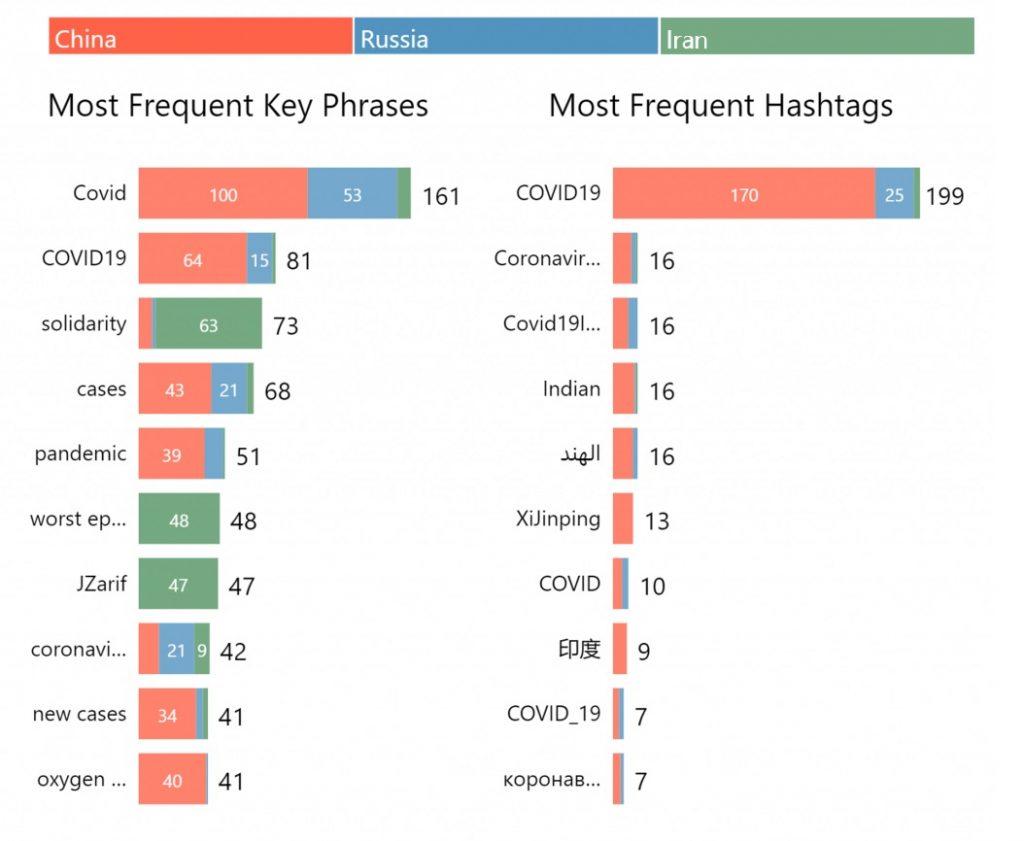 Most frequent terms in tweets from Chinese (in red), Russian (in blue), and Iranian (in green) officials and state-backed media mentioning India between 4/20 and 4/30. (source: Hamilton 2.0)

Interestingly, the third most referenced country in Chinese state-backed media and diplomatic tweets mentioning “India” or “Indian” was the United States (after India and China). This suggests that much of China’s messaging about India’s coronavirus outbreak was focused on the geopolitics of the global response to India’s crisis rather than the crisis itself. 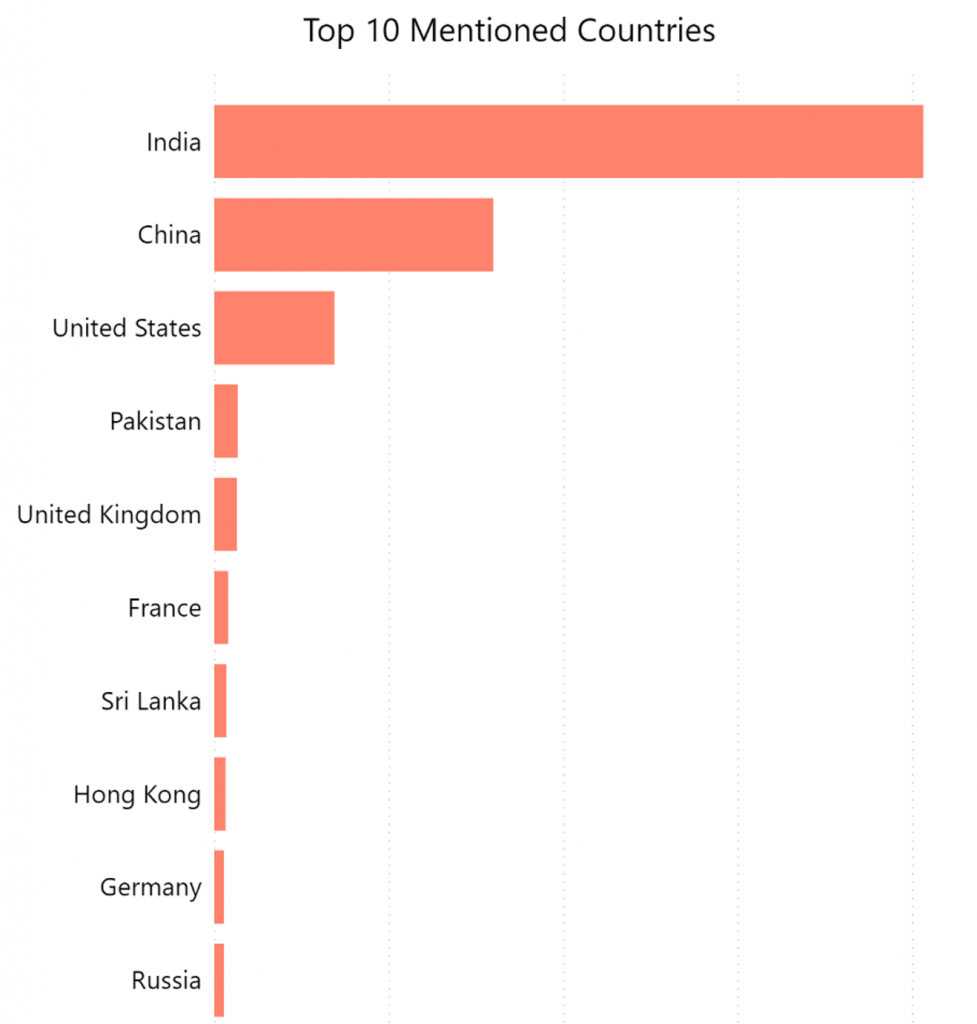 Most mentioned countries in tweets from Chinese officials and state-backed media mentioning India between 4/20 and 4/30. (source: Hamilton 2.0)

When Chinese and Indian soldiers clashed at the border between both countries in June 2020, Chinese diplomats and state-backed media reacted belligerently. The Indian government has since moved to severely curtail the operation of Chinese tech giants in India and has deepened its engagement with other democracies. As India fights to get its most recent coronavirus outbreak in check, Chinese government officials and state-backed media have deployed a more conciliatory tone. However, the expressions of friendship relayed by Chinese government officials and state-backed media barely conceal Beijing’s ambition to pull India away from a group of countries that threatens to effectively challenge the Chinese Communist Party’s hegemonic ambition in Asia.

But, as Dr. Garima Mohan, a fellow in GMF’s Asia program, told us, the propaganda push has not shifted the geopolitical soil. Though China’s offers of assistance and conciliatory tone were welcomed in India, she noted that “media outlets in India started reporting about China blocking flights and shipments to India.” In addition, “the perception in the strategic community that China used the COVID crisis last year to escalate military tensions on the border with India will cloud all offers of help from China.” China’s offers of assistance and messaging have not changed the structural tensions in Sino-Indian relations. These tensions were exacerbated by the “breadth and scope” of U.S. assistance and “messages of solidarity across the Biden administration,” which, Mohan said ultimately checked China’s narrative.

As India deepens its relationships and partnerships with regional and extra-regional democratic countries like Japan, Australia, the United States, the United Kingdom, and France, China will continue to search for narratives and messages that weaken those bonds and ties. The coronavirus pandemic continues to provide instances where China can use carrots like assistance with case numbers to sticks like saber-rattling on the Sino-Indian border. In turn, this provides ample opportunities for Chinese government officials and state-backed media to opportunistically try their messaging on the world’s largest democracy: India.